I have a funny story.  Well, at least I think it is funny; so funny, in fact, that it’s hard to write about it without breaking into fits of laughter along the way.

I spent my late teens and early twenties up on local ski hills teaching people how to ski.  It was a long time ago, during the age of library cards and encyclopedia sales, definitely pre-dating the invention of the Internet.  The only thing that ‘googled’ back then were tiny, glue on, craft eyes.

This may come as a surprise, but ski instructors serve multiple roles on a mountain.  Sure, we taught the basic technique of remaining in an upright position on a downhill slope with sticks attached to one’s feet; but we are also were babysitters, tour guides, rent-a-ski-buddies and an informal concierge. In addition to memorizing mountain trail maps; it was important to know the names of all the Cascade peaks between Shasta and Rainier, the lakes along Century Drive and the little facts that make each one special, the geology behind steam vents, recent weather patterns, the difference between different pine tree species and why some only grow at specific elevations but also, of course, the basics about local wildlife — both the animals on the hill and the après ski hot spots in town.  Thank goodness, I was at the perfect age to absolutely know it all and I never second guessed myself or my answers to mountain guests.

Flash forward 20+ years, my husband and I were in Wyoming at the National Elk Reserve Visitor Center.  They had mounts of all the common wildlife in an exhibit and I saw a critter I had never seen before.  It was little but it was a ferocious looking thing, reminiscent of the Jabberwocky, you know, the one with ‘jaws that bite and claws that catch’ we are warned to beware of in middle school lit. classes.  I asked if it was some sort of mini-wolverine.  My husband seemed surprised that I didn’t recognize the beast. 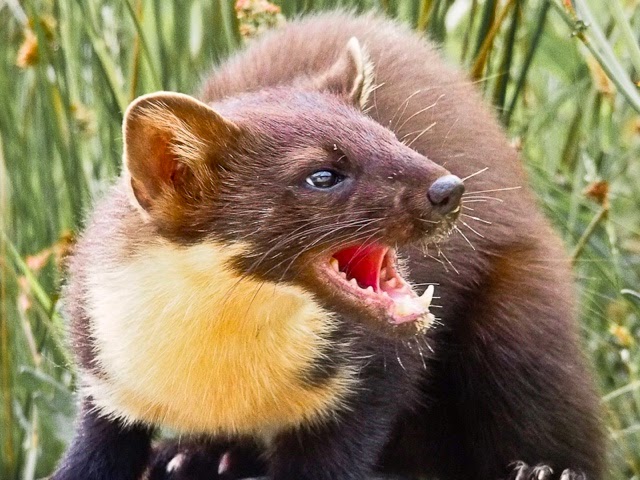 “Hun, that’s a Pine Marten.  I’m surprised you haven’t seen one of those before,” he said with a quizzical chuckle.  After all, hadn’t I spent hundreds of hours skiing on a mountain with both a lodge and ski lift named after the same animal?

“Whoa, wait…  You mean to tell me THAT is a Pine Marten?!”  I stood in disbelief and then started laughing.

Sure I’d seen Pine Martens.  I had even pointed them out to guests, explaining that they were the equivalent of mountain squirrels, playful and fun to watch, perfectly harmless.  I said they fed on pine nuts and bugs and we were lucky to catch glimpses of them because they were really quite shy.  I can’t tell you how many people I shared this information with but I’m certain it was many.  So many, in fact, that I am still laughing…  I’m not sure where I learned about Pine Martens in the first place but I’m pretty sure the person who informed me about them is laughing, too!  (Could it have possibly been from a certain boy who knew I’d never venture off into the trees with him had I known these critters had fangs?  Highly suspicious, indeed!)

For the record, Pine Martens are weasels.  They eat birds, eggs and squirrels.  They have semi-retractable claws, making them unique in the weasel world, enabling them to be skillful tree climbers. They are elusive and nocturnal hunters.  I still think they are pretty cute — at least from a distance and when they aren’t hissing or killing something.