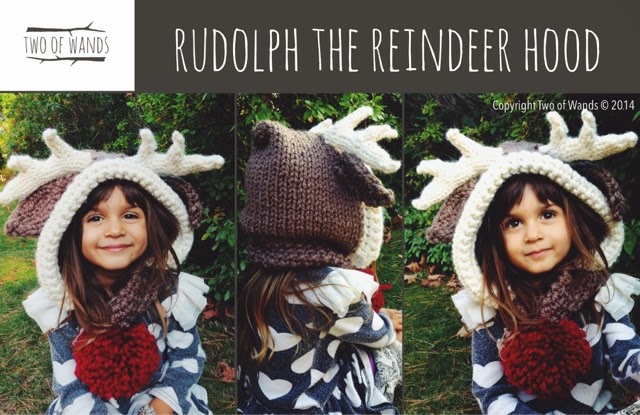 I was scrolling through Etsy because while I like to make things on my own, let’s face it – there are lots of people out there who have amazing talents and sometimes, I’d just rather have them make one for me…  Then I saw it.  The cutest little girl in the MOST adorbs reindeer hat that I have ever seen!!!  A photo came to mind with four sweet little girls, each with a matching hat.  There were two options: the pattern or I could purchase the hats themselves – but that was proving to add up into “cost prohibiting numbers” – so I bought the pattern and BEGGED my knit talented sister to oblige me with 3 — no, make that 4, reindeer hats.

Let me preface the rest of the story by admitting that the pattern sounded complicated and used knitting needles and techniques that I had never heard of.  My sister was very clear when she accepted the challenge, “I only knit.  I DON’T crochet.”  So when she went through the pattern and saw not only the techniques but the fact there was crocheting involved, she said, “I don’t know, Aim…”  I giggled, handed her the bag of supplies and said, “You’ve totally got this.  Easy Peazy.  Either you’ll figure it out or find a way around it.”  So she did.
I had a hard time finding enough (or ANY) of the right color of yarn suggested by the pattern.  All I could find was much softer and less structurally supportive so she fought her way through that challenge, too, and the results are so stinkin’ cute that I added on a 4th order for the girl’s cousin!  She’s likely a little too grown up for a reindeer hat but maybe she can wear it around her cousins over the holiday.
When you add on the fact that both families are big hunters, the little twist of irony makes it all even sweeter!  I can’t wait to see the girls dressed in their gear!
The pattern or individually sold hats can be found on Etsy by Two of Wands if you are interested in your own.