There have been so many changes for us over the past year and as we rise up to meet the challenges, so has our dog pack.

Josie Wales Jordan joined us in early 2011.  She’s a spitfire of a Corgi that lives well up to her name of The Outlaw.  She’s sweet, quirky and mischievous beyond belief.  She has moved Scout into both an alpha and mothering role that has been very rewarding to watch take place.  Having a new puppy around the house helped to fill the quiet void her Corgi predecessors left behind. 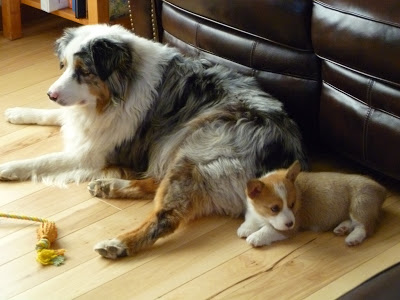 Max joined us a few weeks later.  He’s an Aussie my dad had adopted from a shelter several years ago.  We figure he’s about 8-9.  He was in pretty bad shape by the time we got to him but he’s making a turn around and definitely fits into the family.  He barks too much, has a low tolerance of puppy play and we seem to forever be working to improve his skin/fur conditions but he is steadfast in both loyalty and love.  He’s a constant reminder that family bonds last forever.

Ruger joined the pack in May 2012.  He is definitely a Mama’s Boy and it’s quite obvious that the dogs raised him.  He is full of personality and loves to chase the dogs around the yard.  He has no manners but he keeps the other dogs on their toes and frankly, it is a perfect fit.

Scout remains the cornerstone of our household.  She is a 4 year old Aussie that is the great-niece of my first dog, Kally.  She is gentle, protective, smart and sensitive to the needs of humans and animals alike.  She helped integrate “the puppy” and “the old man” into a pack that works well together.

﻿﻿﻿﻿﻿﻿﻿﻿﻿﻿Biscuit-the-Pug, comes to visit a few times a year.  She lives in Portland with my niece and nephew but still finds a way to adjust into the pack and onto the farm.  Josie Wales isn’t sure that she likes to share her role as “the puppy” with anyone else but they seem to work it out.﻿ ﻿﻿﻿﻿﻿﻿

﻿﻿Sgt Hanz Corgenheimer spent many great years on the farm.  He was an incredible dog and did most of Scout’s training — which is partially why Scout is the sweet spirited dog that she is.  Bitsy-The-Wonder-Dog was a ranch dog to the core and always a source of entertainment.  This is my favorite photo of all three of them together.﻿  They are missed but we see glimpses of what they left behind in our other dogs.